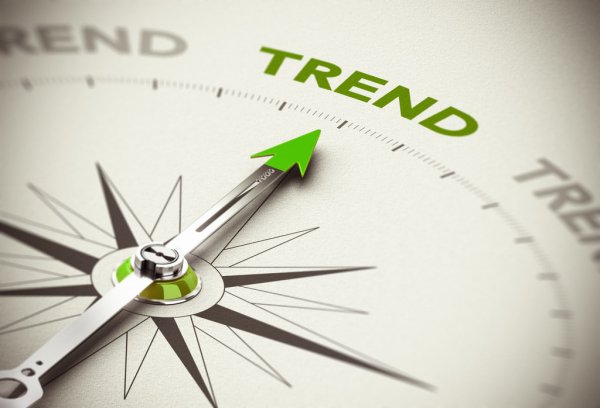 So, the first key trend is the development of the market of passive investment instruments. In a July 2021 report, BCG experts inform about an increasing trend in the market of passive investments, which is associated with the growth of investments in exchange-traded funds or mutual funds. In 2020, total passive investments reached $22 trillion and their share increased by 17%, while the growth of total investments during the same period was 11% and reached $103 trillion. Of the world's total investment, 41%, or $42 trillion, came from retail investments, which are companies or individuals managing money for themselves or for others. Institutional investments representing banks, investment funds, and insurance companies accounted for 59% or $61 trillion in 2020. As for the growth of the volume of investment by region, we can say the following. The highest growth rate is in North America, as well as in the Middle East and Africa - 12% and 12%, respectively, a little less growth in the Asia-Pacific region, which amounted to 11%, and 10% - in Europe (BCG).

The experts of BCG also noted that the leader in passive investments is the United States, and no other country is able to overtake the market yet, and the largest part of cash flows comes from the largest players, for example, today more than 20% of the index S & P 500 accounts for the five largest companies in the United States by market capitalization, including Apple, Microsoft, Amazon, Facebook and Alphabet (BCG).

The next key trend is the growing popularity of the private segment of alternative investments, which includes such investment options as the purchase of antiques, vintage cars, wines, etc., and the private segment is investing money directly in companies. Despite the fact that this segment still represents a small share of the asset management market, BCG experts expect good growth in the segment. With regard to money turnover in the private segment according to BCG research the figures are as follows: in 2018 was $595 billion, in 2019 - $586 billion and in 2020 - $529 billion, while the reserve capital of private equity funds reached a historic high in 2020 - 1.5 trillion dollars, and the most popular areas of private investment are pharmaceuticals, IT and telecommunications services (BCG).

The next key trend is the ECG agenda, which is now becoming an investment mainstream, and the situation in the regions today is that in Europe it has also become mandatory in matters of investment, and in the U.S. and other countries the issue is just beginning to gain momentum, although it develops rapidly enough. Well, the BCG experts underline the increasing activity of investors urging companies to comply with ECG principles, in particular, in the USA, the share of shareholder resolutions devoted to compliance with ESG principles in 2017 was 50%, compared with 33% of the period 2006-2010.

Another trend is the increasing interest of investors in the Asian market. The demand for Asian economies is due to a number of factors, including the entry of many national companies into the international market, the development of partnerships and the rapid growth of ecosystems. In 2020, China attracted $144.37 billion, more than the United States, and China's economy was the only one to grow in the face of the pandemic crisis. India, too, shows impressive results, if in 2019 Indian startups attracted more than 14 billion dollars, then in 2020 the same figure was 63 billion dollars.

And finally, another trend is the growth of trust in robot consultants. For example, a study conducted by Oracle in the Asia-Pacific region showed that coronavirus has had an impact on people's anxiety and fear for their financial well-being, and, as a result, 76% of people surveyed began to trust robo-consultants, because they doubt that they can manage their money independently and competently to invest.